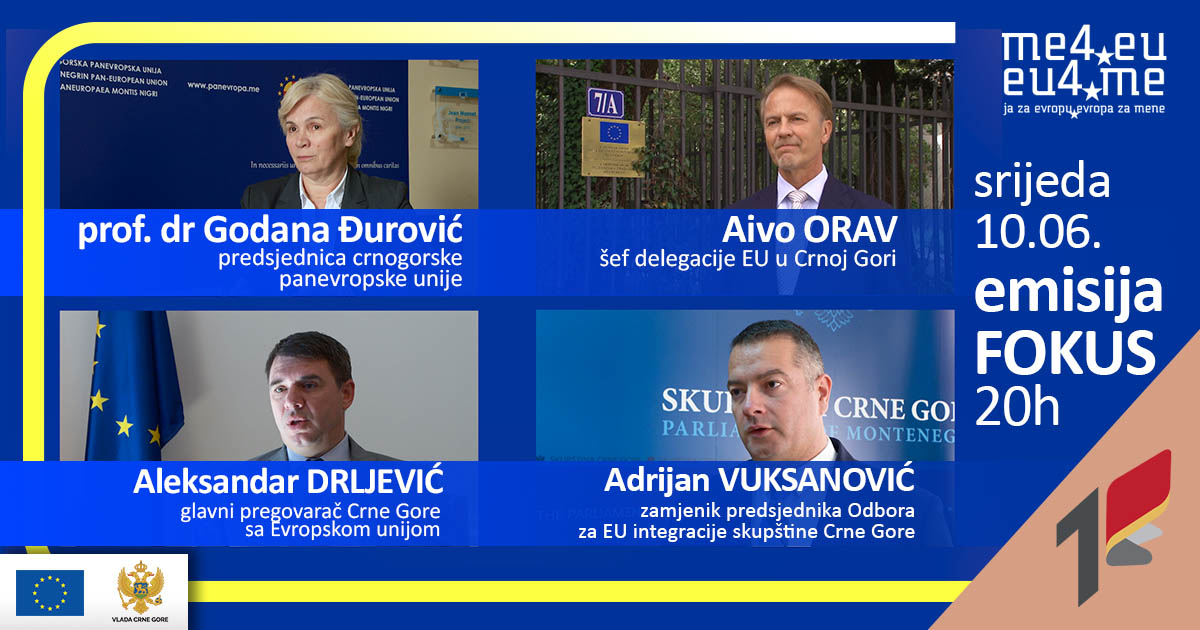 Chief negotiator Aleksandar Drljevic, Head of the EU Delegation to Montenegro Aivo Orav, President of the Montenegrin Pan-European Union prof. Gordana Djurovic and Deputy Chairman of the Committee for European Integration of the Parliament of Montenegro, Adrijan Vuksanovic spoke about the dynamics of the negotiation process after the pandemic crisis, guidelines and assessments that Montenegro can expect from the upcoming EC report, as well as the importance of EU support to the Western Balkans during coronavirus pandemics.

The European Union has shown affection for the Western Balkans during the pandemic crisis, and now, in anticipation of the report and with messages of encouragement from the European Commission, the enlargement process is expected to accelerate, said the participants in the show “Iz ugla” which was implemented by the General Secretariat of the Government within the EU4ME project.

Everyone agrees that the coronavirus has influenced the dynamics of the accession process and the shift of focus from that topic, but also that the forthcoming period brings progress in the integration of the Western Balkans.

“The focus of us in Montenegro, but also of the EU members, was on protecting human lives and the health of the population. I expect that, after the situation calms down, our attention will be focused more on activities within the negotiation process. Even during the crisis, the EC made important decisions related to the enlargement policy, opened negotiations with Albania and North Macedonia. I expect that, after the proclamation of the end of the epidemic, we will witness the activities that will lead to the opening of Chapter 8 and the entry into a new phase of closing the chapters that are ready for that,” said Drljevic.

According to Ambassador Orav, the EU does not make big promises, but when it does, it always keeps them. “It sometimes takes time, but we succeed. The fact that the EU decided to open negotiations with Albania and North Macedonia during the crisis speaks in favor of that. The same goes for enlargement, because the messages from the top of the EC are very encouraging. “We hope that the enlargement process will accelerate and I personally would like Montenegro to be a member of the EU as soon as possible,” he said.

Professor Djurovic believes that the pandemic made a cross-section and stopped the process, however, after working from home, from this month the EC is expected to work at full capacity and that Montenegro will get a clear road-map in the report.

“That does not mean that reforms are pending, they are continuing, we know what to do, the benchmarks remain. Our road-map means that, if this is an election year and autumn brings an election cycle, after all that comes a report and European recommendations,  the new government that will be formed should set a new road-map to meet the conditions of the EU membership,” she said.

Adrijan Vuksanovic believes that the EU is now exposed to a double problem, which is reflected in showing solidarity with the countries in accession and repairing the consequences of the crisis in its members, but that there is no doubt that the Western Balkans will be the focus of the EU. „It is difficult and ungrateful to talk about the speed of the process and the dynamics at this moment, because all institutions, except for repairing the consequences, will be focused on strengthening the resistance to similar crises that may follow. In any case, the enlargement policy is one of the most successful EU policies, and I expect that in the coming period we will open Chapter 8 and start closing the chapters we are ready for,” he said.

When it comes to guidelines for the next period, as well as areas that are expected to be noted as priorities in the EC report announced for the autumn, the interlocutors agree that the focus will be on the rule of law.

“I do not expect certain specifics when it comes to the report, we are aware that Chapters 23 and 24 are the main focus of our work and the interests of the EC. We have done significant work in the previous period when it comes to the formation of institutions and the establishment of the legislative framework, and what is expected of us at this stage is the production of concrete results, i.e. to show that all institutions are functional in the true sense of the word“ said the chief negotiator.

“Over the last two months, we have not talked much about the next steps, because everyone was focused on fighting the coronavirus, and what we saw in Montenegro is remarkable, how the Government and society as a whole approached the problem. Now that we continue the story about the next steps, about the path that Montenegro is on, about the report, we must point out the most important issues. The rule of law is key and we will pay special attention to it,” said Ambassador Orav.

Prof. Djurovic also points out that Montenegro will soon get an overview of the situation in Chapters 23 and 24 and issues related to further reforms of the election legislation, freedom of religion and property law, as well as a large number of judicial functions that have been blocked due to a two-thirds condition.

Vuksanovic, as he said, does not expect anything spectacular, because everyone is aware that the priority of negotiations is concentrated in the content of Chapters 23 and 24. “It will be interesting to hear political recommendations, I mean specifically the realization of political dialogue, it is a relationship that depends not only on the position, but also on the opposition, “he added.

Djurovic pointed out that the EU is present and that it views us as the closest neighborhood and future members who need help in all circumstances.

Ambassador Orav reminded that the EU has always been the largest donor in the Western Balkans, but that this was not so visible in the past, while the chief negotiator believes that a developed partnership and joint and solidarity actions are the most adequate response to the crisis.