The Embassy of France presented insignia of the National Order of Merit to the Rajko Uskokovic, Vice President of the MPEU 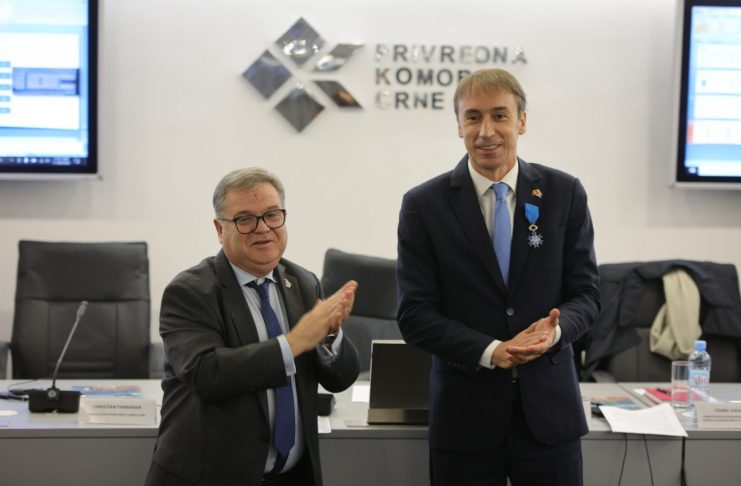 The Embassy of France presented insignia of the National Order of Merit to the Rajko Uskokovic, Vice President of the MPEU

Within the conference dedicated to the fight against cybercrime, potential dangers and experiences of France, which was organized today by the Association of Franco-Montenegrin companies in cooperation with the Chamber of Commerce of Montenegro, the ambassador of France, Mr. Christian Timonie, in the presence of the representative of the Government of Montenegro, the rector of the University, Mr. Vladimir Božović, representative of the Chamber of Commerce and representatives of Montenegrin and French companies, presented the order of Knight of the National Order of Merit to Rajko Uskoković, member of the presidency and vice-president of the Montenegrin Pan-European Union.

“The ambassador added that the mentioned results would not have been possible without the personal qualities of Mr. Uskoković, his openness, commitment, persistence and generosity, which is recognized by everyone who has the opportunity to work with him.”

I am extremely grateful to the Republic of France and its institutions for being awarded the Order of Knight of the National Order of Merit, and I am especially honored to have received the order from his Excellency, Mr. Ambassador Christian Timonier, because for me it is an additional honor and at the same time a significant obligation to in the coming period, I will work with even more enthusiasm to improve economic relations between France and Montenegro.

I have only fond memories of the friendly country of France. 20 years ago, from the then, but also from today’s perspective, the great business adventure of establishing air flights between Paris and Podgorica and connecting the two countries by the fastest route started. It was not at all easy to position oneself in such a demanding market because that engagement required great effort, sacrifice and patience. Since 2003, some 50 tourists from France to Montenegro – after 10 years, the national airline Montenegro Airlines transported 50,000 French tourists annually, and in those years France was the country with by far the largest number of tourists from the European Union in our country ! The mission was fulfilled because we managed to bring the two countries closer together and strengthen touristic, diplomatic and cultural ties.

That decade spent in Europe’s most beautiful avenue, the Champs-Élysées, passed incredibly quickly, like in a dream. In addition to my involvement in aviation, I also performed the role of a business representative and tried to establish cooperation with other business activities, all with the aim of strengthening economic relations. Because today, only the economy is able to overcome all misunderstandings, bring people closer together, strengthen cultural exchanges, strengthen diplomatic forces and lead to prosperity and improvement. That is why France is necessary for Montenegro and that is why Montenegro can learn from France.

Returning to Montenegro brought a new challenge in the form of protecting our nature and environment. Certain natural assets, proclaimed by the Constitution as the only ecological states in Europe, were in danger. I started to deal with green economy and ecology, hoping that the effort will yield results. And it arrived in 2018, when the project of the French company VALGO, whose representative for the region I am still today, won at a large international tender, which provided for the permanent export of tens of thousands of hazardous materials from Montenegro.
Along with that came the position of president of the Association of French-Montenegrin companies and the creation of a network of businessmen and friends of our two countries. Because friendship and trust are a condition for all success in life, they are hard to gain and easy to lose.

Dear Excellency,
Dear friends,
I thank you for the great honor and, at the same time, the great challenge to strengthen the solidarity between our countries and reach the level of prosperity in the coming period. I will be extremely happy if in the coming period we from Montenegro will be economic partners of a great country, in every sense great France.

Long live the eternal friendship of France and Montenegro!