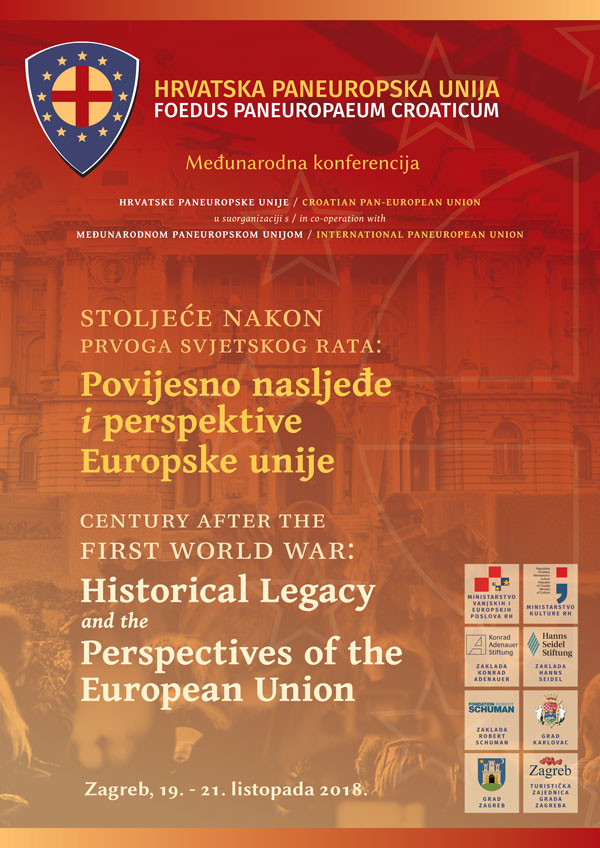 The Croatian Pan-European Union organized the international conference “Century after the First World War: the historical heritage and perspectives of the European Union” in Zagreb on 19-21. October 2018.

The delegation of the Montenegrin Pan-European Union participated in the conference, while among other participants were also presented President of the HPEU Mislav Ježić, President of the International Pan-European Union Alain Terrenoire, the General Secretary of the International Pan-European Union Pavo Barišić, representatives of Pan-European organizations from other Southeast European countries, as well as Europe as a whole, then the Prime Minister of the Republic of Croatia Andrej Plenković, the Minister of Foreign and European Affairs of the Republic of Croatia Marija Pejčinović Burić, the Deputy of the President of the Republic of Croatia Mate Granić, the European Parliamentarians from Croatia, Germany and Slovakia, representatives of the Konrad Adenauer Foundation and the Hans Seidel Foundation and others. As part of the conference, a special block was organized in which the Presidents and representatives of the Youth PanEvropa from several countries shared their opinion on specific topics.At the end of the conference, the Declaration of Participants was adopted with key messages for further development and progress of the region and encouragement towards the European Union further development in up-coming key years.

“We, participants of the international conference of the Croatian Pan-European Union in Zagreb in 2018, from France, Germany, Hungary, Slovakia, Bosnia and Herzegovina, Montenegro, Macedonia and Croatia declare that: