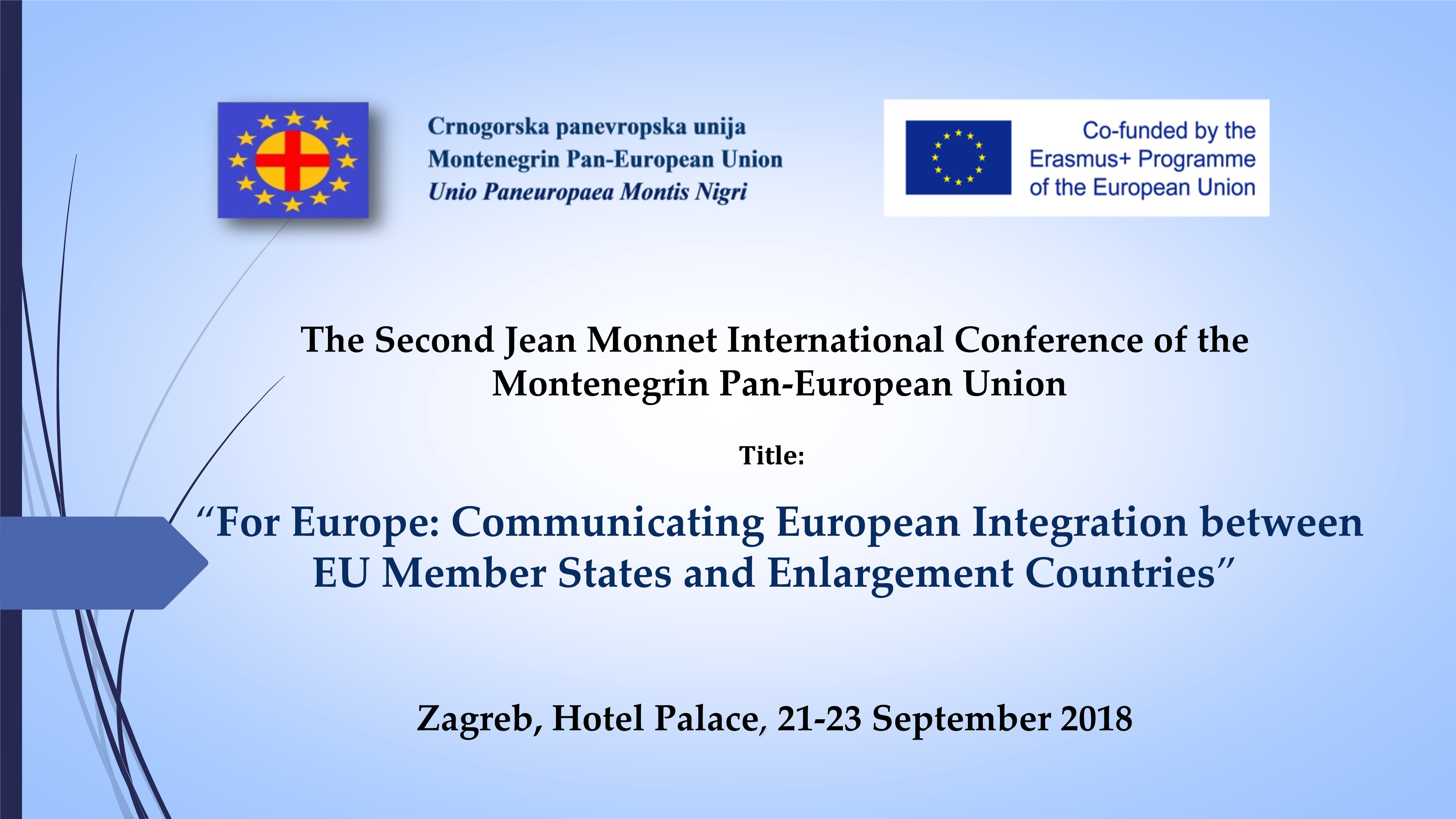 The full text of the Declaration:

“We, participants of the second international conference of the Montenegrin Pan–European Union, held in Zagreb, capital of Croatia, express our will to support the better communication about European integration process between the European Institutions, the Member States and the Candidate and Potential candidate countries from the Southeast Europe in order to support dynamic integration process of Montenegro and all countries of the region to the European Union. We are advocating for the following:

By promoting European values and achieving main goals of our organisations, we are striving to enhance policy debates in the region, to support the fulfillment of the EU criteria in our countries, and to contribute to faster EU integration and to establishing of united, strong and stable Europe. We are convinced that better communication is a strong instrument for enhanced dialogue between the European institutions, the EU Member States and countries of the Southeast Europe. In that sense, the conferences of the Pan-European organisations foster dialogue between all stakeholders, including governments, academic community, CSOs, citizens and media.

Advocating a renewal of the Enlargement process, we welcome the conclusions of the Summit of the leaders of the European Union and the WB6 partners in Sofia on 17 May 2018. It confirmed the European perspective of the region and set out a number of concrete actions to strengthen cooperation in the areas of connectivity, security, migrations and the rule of law. Sofia priority agenda also supports socio-economic development and put a special focus on youth, promotes a Digital agenda for the region, supports reconciliation and good neighborly relations. The EU leaders held the first summit with regional counterparts in 15 years and this reinforced engagement ensures more security, stability and prosperity, builds bonds and connects economies and people.

We acknowledge the need for putting more focus on security and the fight against illegal migration, securing prosperity and competitiveness through digitization, and stability in the European neighborhood, as it is promoted by the Austrian Presidency of the Council of the European Union. Moreover, one of three priority areas is „Stability in the European neighborhood – EU perspective of the Western Balkans/South Eastern Europe“. Following mentioned activities during Austrian Presidency, it will be of crucial importance that Romania, as a Balkan country, keeps high on its priorities the issue of the Western Balkans, including the accession negotiations and further steps concerning the EU integration of all countries (Sibiu Summit, 9 May 2019). Reinforced commitment to enlargement should be continued during 2019 (Finland) and further strengthened especially in view of future EU- Western Balkans summit in Croatia in 2020.

We recognize and very much appreciate the reinforced and significantly strengthened engagement of the European Commission in its most immediate neighborhood during the past year. It proposed an ambitious Western Balkans strategy in February 2018. This approach by the Commission enabled progress to be made. A historic agreement on the name issue between Skopje and Athens was reached. The border demarcation agreement between Kosovo and Montenegro was ratified. The Commission proposed to the Council the opening of accession negotiations with Albania and the Former Yugoslav Republic of Macedonia. Montenegro and Serbia advanced well in their talks, while Bosnia and Herzegovina made small but important steps in the right direction, notably by answering the questionnaire on its membership bid, which allows the Commission to take the work forward. And the recommendation to lift short-term visa requirements for Kosovo was reconfirmed by the Commission in 2018.

We strongly support the statement of the European Commission President Jean-Claude Juncker in the State of the Union Address 2018 where he emphasized that “there can therefore be not a moment’s respite in the EU efforts to build a more united Europe.  Europe can export stability, as we have done with the successive enlargements of our Union. For me, these are and will remain success stories – for we were able to reconcile Europe’s history and geography. But there is more to be done. We must find unity when it comes to the Western Balkans – once and for all. Should we not, our immediate neighborhood will be shaped by others”. We are advocating also in the same sense a stable, strong and united Europe including the SEE/WB6 countries – once and for all!”